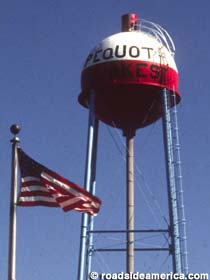 Pequot Lakes is a city in Crow Wing County, Minnesota, United States. The population was 2,162 at the 2010 census. It is part of the Brainerd Micropolitan Statistical Area.

According to the Pequot Lakes Heritage Preservation Commission, the city once called Sibley and Frogtown was renamed as Pequot. In 1900, Walter and Flora Brown filed their plat for the E 1/2 of the SW 1/4 section 10 in T136N-R29W under the title Pequot. The Pequot Indians are a tribe that used to dominate southeastern New England before the English colonists arrived. While no Pequot tribl members lived in Minnesota, they spoke an Algonquian language related to that of the local Chippewa(Ojibwe) tribes. Herman Melville named his lead ship in his novel Moby-Dick as the Pequod.