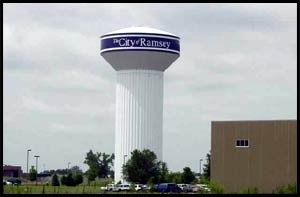 Ramsey is a city in Anoka County, Minnesota, United States. The population was 23,668 at the 2010 census. It is a northern suburb of the Twin Cities.

U.S. Highways 10 / 169 (co-signed) and State Highway 47 are two of the main routes, and a station on the Northstar Commuter Rail line to downtown Minneapolis is located in Ramsey.